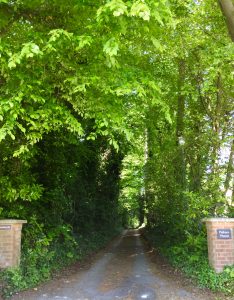 Originally “Sleepers Hill” was the name of a promontory of the Hampshire Downs to the west of the valley of the river Itchen, overlooking the ancient city of Winchester.  A map dated 1871 shows the area as open, unenclosed downland;  the name Sleepers Hill comes from a local legend that King Arthur and his knights sleep under the hill and will one day emerge to save England.  The full story is in an article from the Winchester Cathedral Record, The Butterfly Bishop and King Arthur.

In the late 19th century a short lane was created running westwards up the hill from what is now the junction of Sparkford Road and Airlie Road at the foot of the hill.  A few large Victorian houses were built along this lane, which was then called St Mary’s Road (one of the houses is still called St Mary’s).  In the 20th century the road was extended westwards to join with Romsey Road, more houses were built and trees were planted, so that the hill as a geographical feature is no longer clearly visible and the name “Sleepers Hill” is now used only for the road.  Residential development continued through the 20th century, including several side lanes to the north, and is ongoing in the 21st century.  There are now about 100 houses in the Sleepers Hill area.

The Hampshire Register of Historic Parks and Gardens lists Sleepers Hill as a whole, with this note:  “Late C19 was the site of several grand houses with large, mainly terraced gardens.  Some of the larger estates were broken up in the C20 to make way for higher density properties.  It is still a well-wooded landscape (2004).”
“Milnthorpe”, one of the oldest houses, near the bottom of the hill, has its own entry in the register:  “mid C19 building in Gothic style with grounds covering c.8ha (20 acres);  estate broken up in 1932;  ice house – now believed to have been a water storage tank.”
Note that the Hampshire Register has no official or legal status – it is simply a database of parks, gardens, and other designed landscapes in Hampshire, based on survey, research and recording of sites carried out by Hampshire County Council, Hampshire Gardens Trust and others.  Sleepers Hill is not listed in the national Register of Parks and Gardens of Special Historic Interest which is maintained by English Heritage.

The family of Sir John Thornycroft, the naval architect (1843–1928, founder of John I. Thornycroft & Co. with a shipyard at Woolston near Southampton, later merged with Vosper & Co. to become Vosper Thornycroft, still trading as VT Group plc) formerly lived at “High Wyck”.

Captain George Edward Thomas Eyston MC OBE was a British racing driver in the 1920s and 1930s, and he broke the land speed record three times between 1937 and 1939. He was also an engineer and inventor. He lived in Sleepers Hill House in George Eyston Drive, which was demolished in 2016 and replaced with six new properties. See: https://en.wikipedia.org/wiki/George_Eyston